Today on the otherhand was full of adventures! We decided to rent a motorbike rather than finding a tuk tuk to take us everywhere. It was just an automatic little bike, basically a scooter that could go really fast. Anyways, it was literally the worst thing ever and I hated every moment of it. Turns out sitting on the back is a million times worse than I thought it would be. Would’ve much rather been driving and in control of my own destiny. But instead I just got to sit on the back and think about how dead I would be if literally any mishap happened… especially in Chiang Mai where people are already crazy drivers.

ANYWAYS, back to the day which really was fun when you don’t think about the bike. We started off by driving down to the tiger kingdom. Basically they have a bunch of tigers of different sizes and colors and you can pay to pet them. We decided to pet the “big” tigers cause I thought the actual experience would be cooler than petting the babies even though they were sooooooo cute.

So you walk into this tiger cage with 3 tigers chilling and this one tiger was sitting on a table made some funny noises when we walked in, which freaked me out just a tad. But we walked over to a tiger that was napping first and got to pet him and take some pictures. They are really very beautiful and amazing! 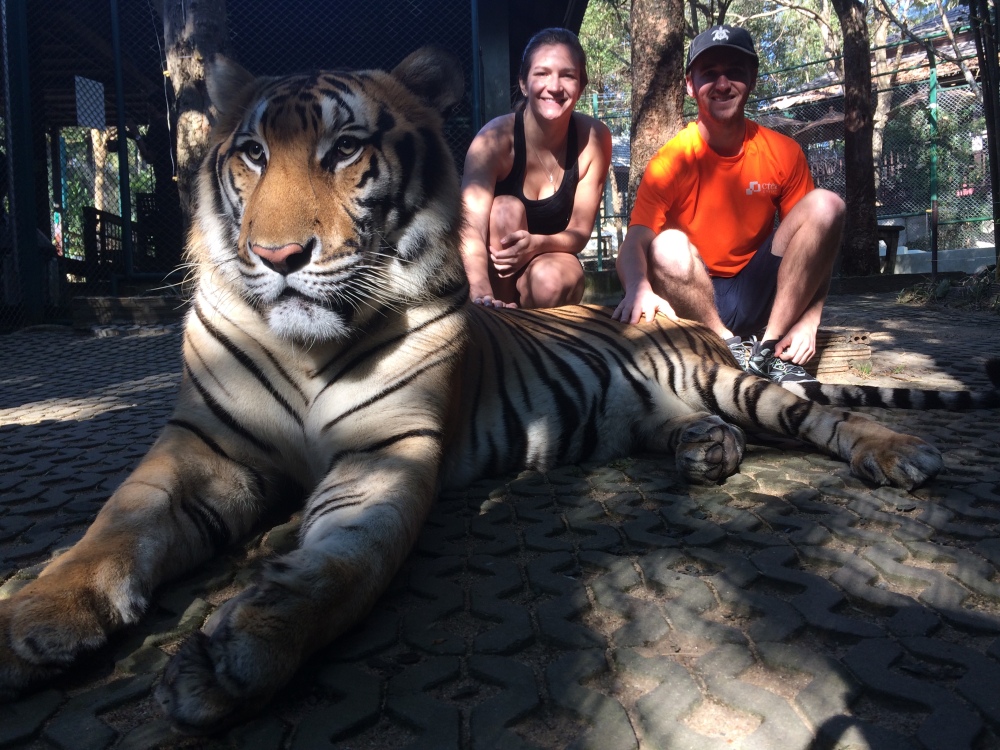 Then we moved onto the tiger that made weird noises at us when we walked in. At this point he had rolled over and the guy told me to give him some belly rubs lol 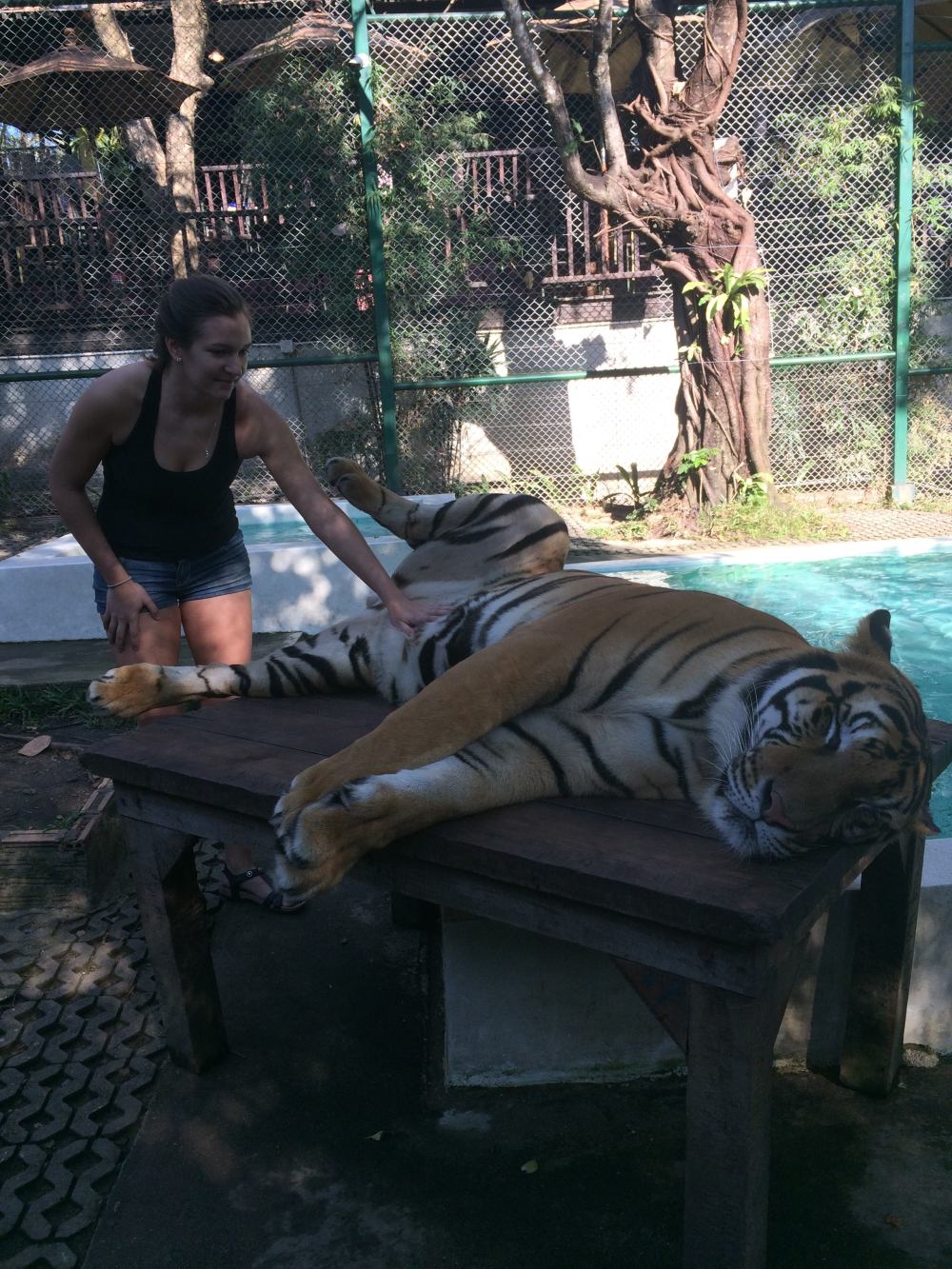 Another trainer came over and gave the tiger some meat and then the tiger decided to get up, at which point the trainers told us to get on the table with him and were getting super excited for us. Like seriously, the guy was SO EXCITED taking pictures. But gave me a lot of options to pick from so I can’t complain. 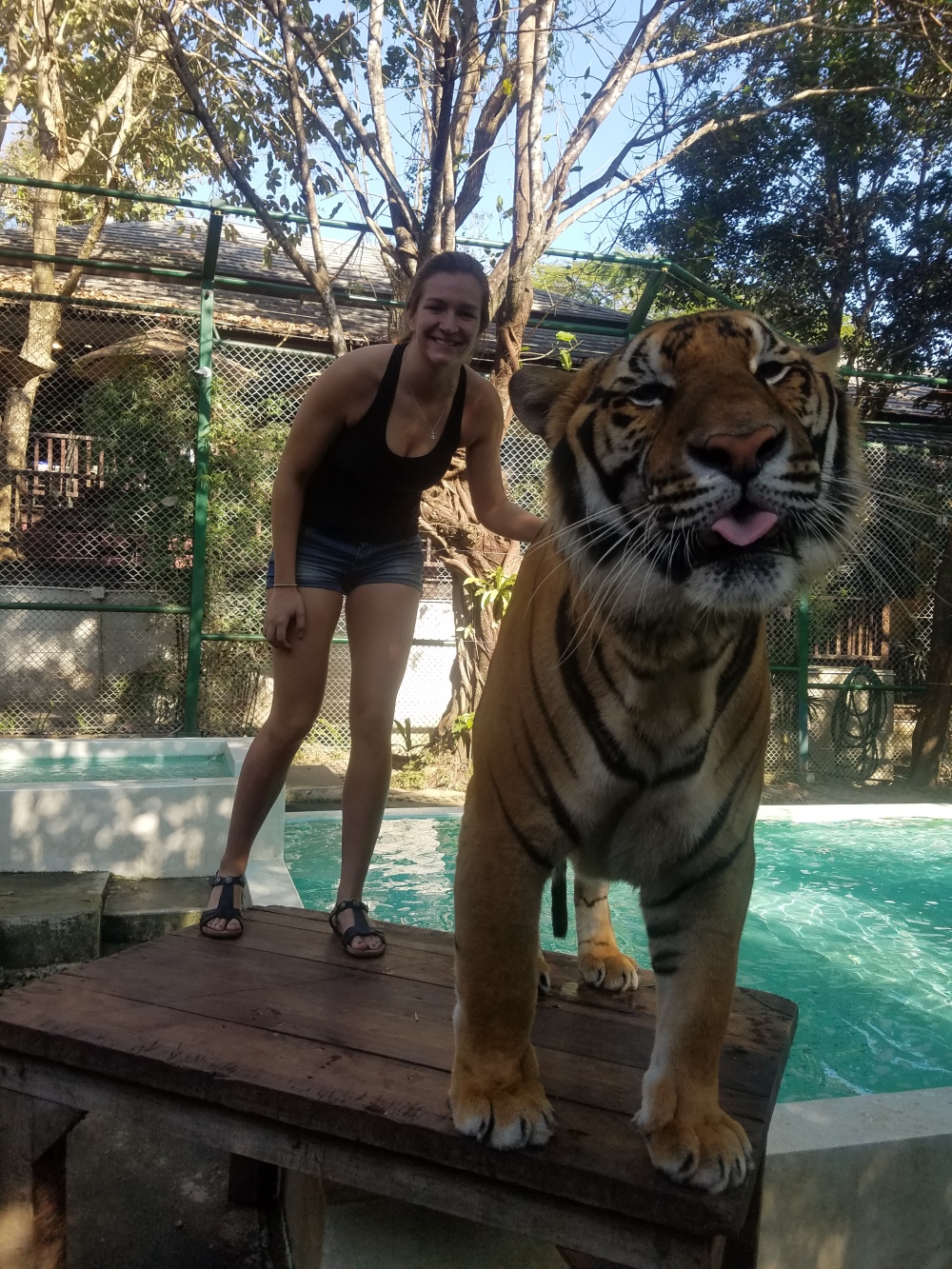 After the tiger petting experience, we walked around the grounds and saw all the other tigers and of course went and watched the little baby ones play for a long time. They were so cute ❤ 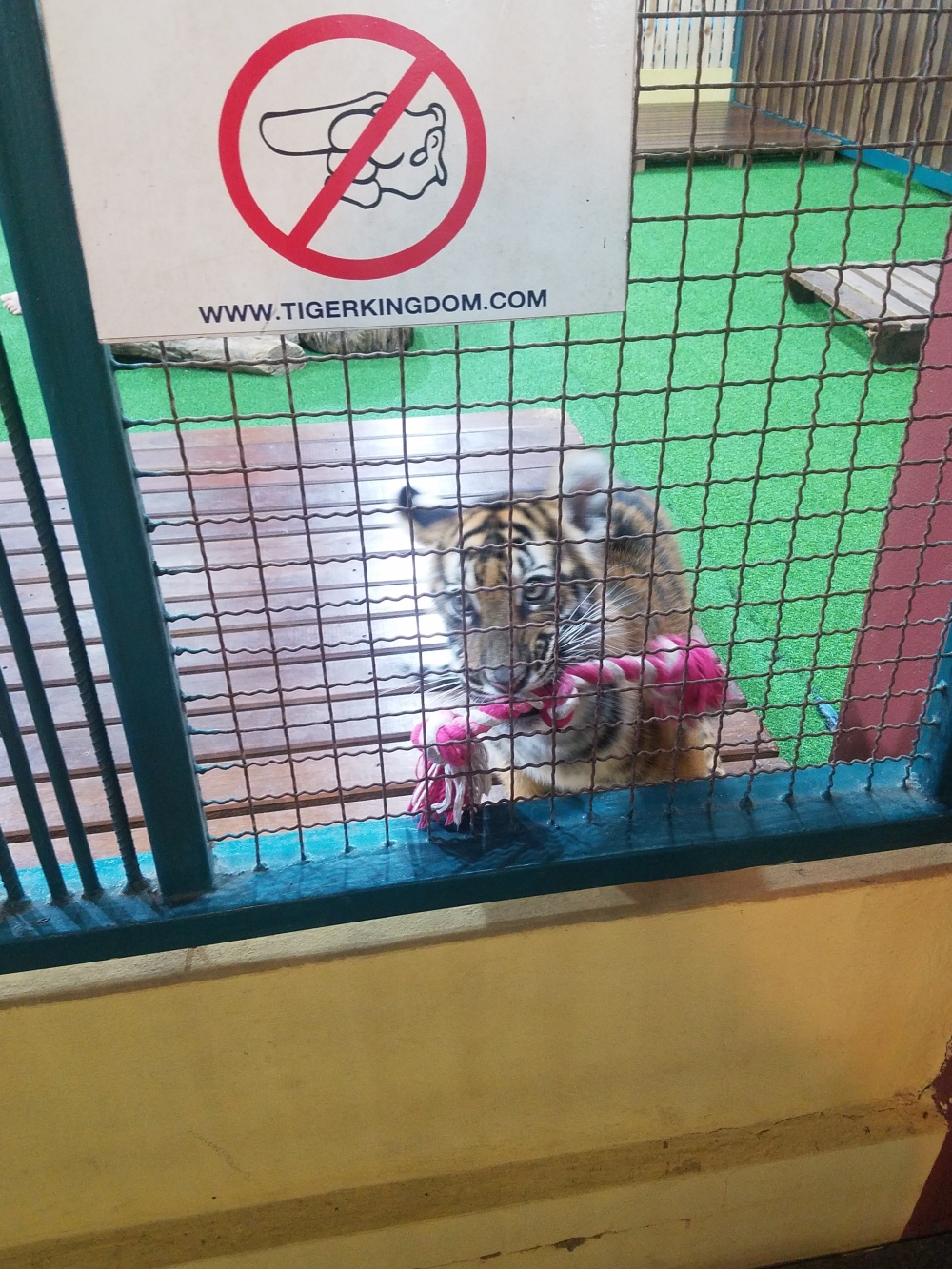 Once we got our fill of cute tigers, we drove over to this Snake Compound-kinda weird I know. They had about a 20minute show they put on with snakes! First they had two cobras, which the guy tamed and even kissed! Then he brought out a giant snake and we were able to “hold” it. Then there were a few other random snakes he did tricks with. They make it seem like snakes are easy to tame, but I’m sure they are not. 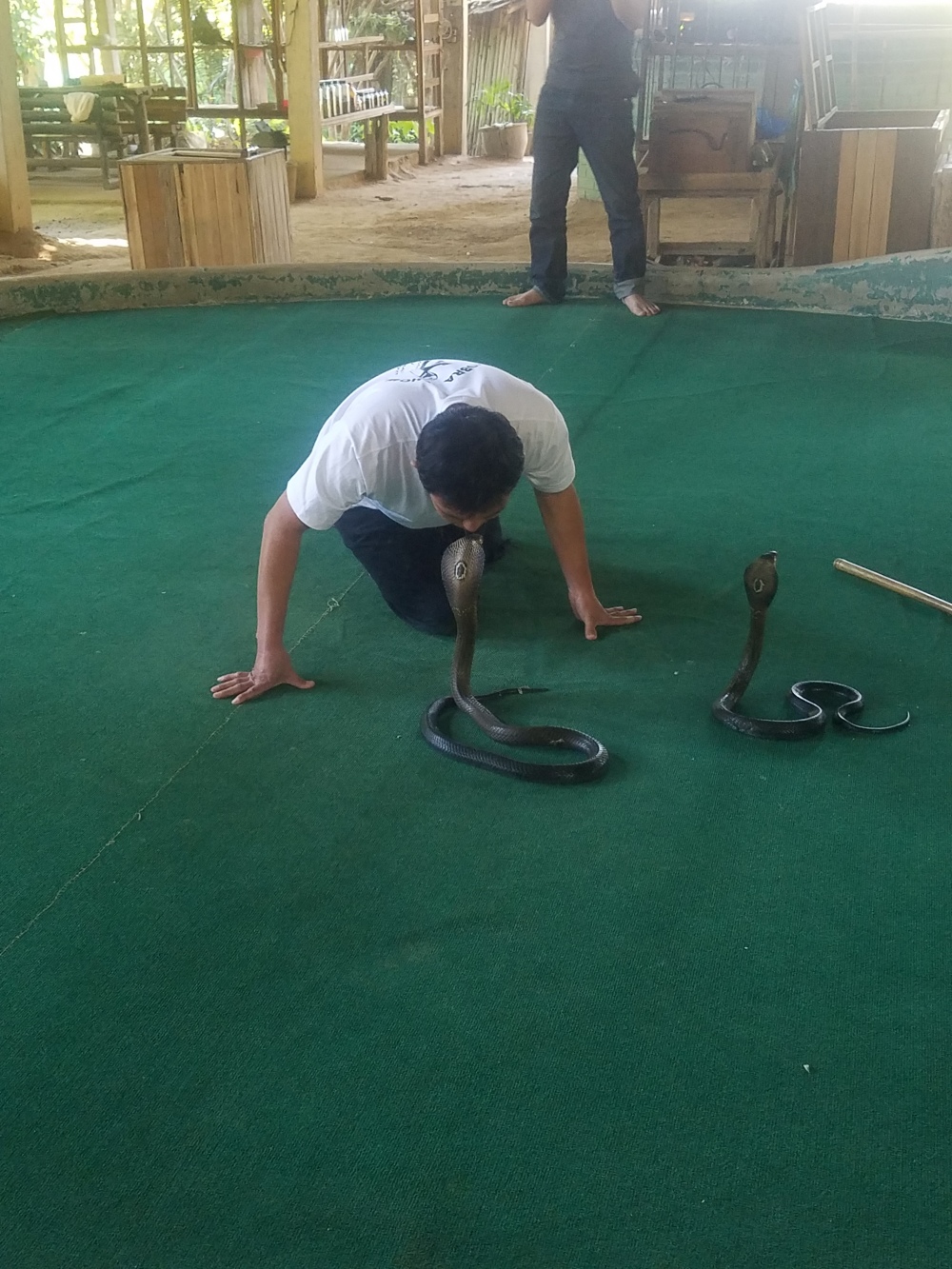 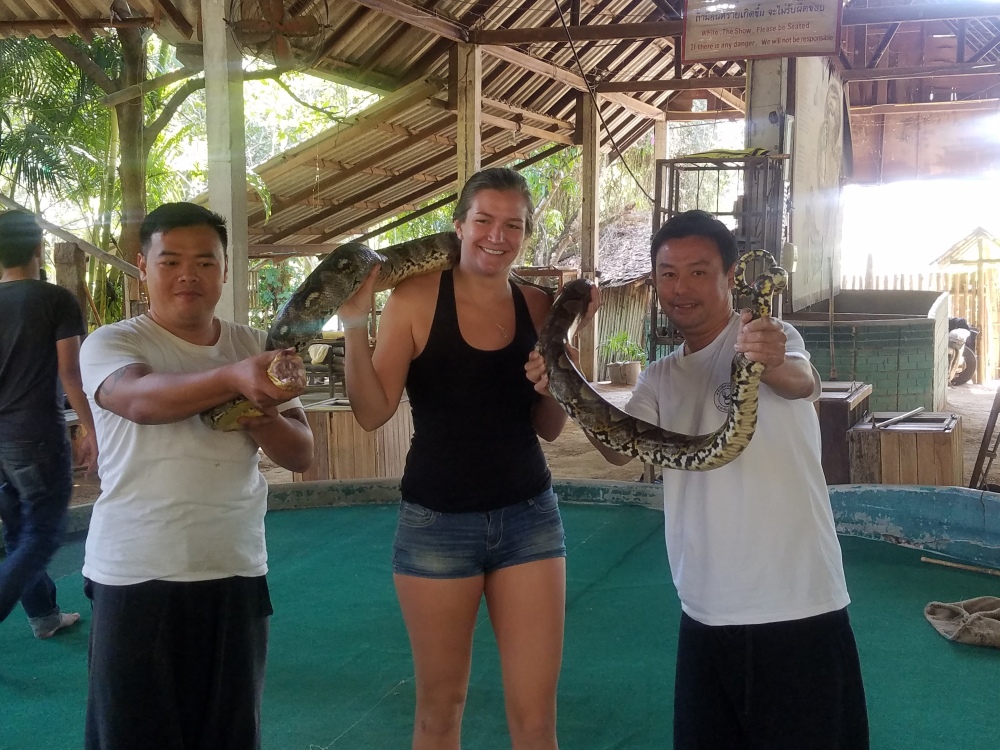 After the snake experience, we headed to the long neck village, which is basically these tribes of people and some of them still practice the art of putting rings around your neck for beauty. The village was very pretty and they actually had some signs up about a scientific study that was done on one of the ladies. Turns out the rings don’t actually make your neck any longer. Instead it just pushes your shoulders down and pushes your ribs in, which gives the illusion of having a longer neck.

Little village was mostly just shops of stuff you could buy 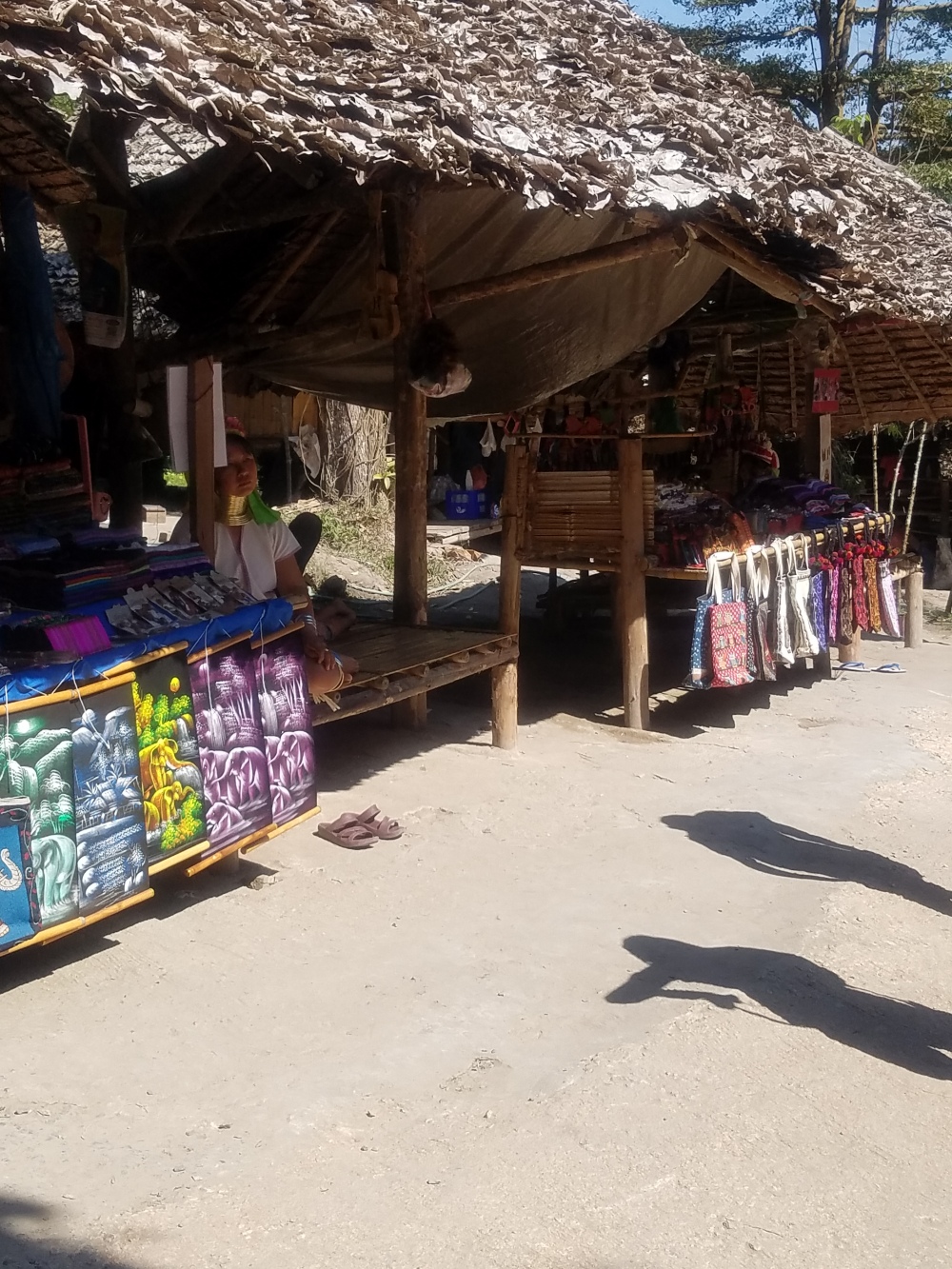 After the village, we made the deadly drive back to our hostel and got some lunch. Sam really wanted to check out this place called the Grand Canyon, which was basically a man made canyon that they filled with water and had a bunch of rafts you could float around in. It had this cliff jump you could do that was about 25feet. Sam did it a bunch of times, I tried it once… a bunch of water went up my nose and made my throat feel as if I had swallowed a bunch if water… so needless to say, I didn’t feel the need to do it again. I didn’t take my phone with there so I have no pictures. An easy Google will show you what it looked like! (Good to note there was actually another side of the canyon which had a bunch of blow up obstacle course that looked sooooo fun)

When we got back to the hostel for the night I decided we should go sit in the main area and try to talk to the other guy sitting there. It worked! His name is Chris and was a super cool Canadian. He ended up going to the night market with us for dinner along with a German girl from our hostel.

I feel like I should note that I finally tried Thai iced tea, which my brother had been raving about. It was actually pretty good.

After dinner, we went back to our hostel and chilled with Chris. Another guy Chris had met earlier came and hung out with us- Tom. Tom is from England so I told him when I move there next year I’ll come find him- future bffs!