I got into Amman late around 11pm and met Jack and Sam at the hotel right by the airport. We woke up bright and early to get 6am breakfast and go pick up our rental car at the airport. By 7am we were on our way for our 3.5hr journey to Wadi Rum!

On the way we got flagged over by the police. TWICE. The first time apparently Jack was speeding and the cop just stepped into the middle of the road and flagged us over. After a minute though they let us go and told us to drive slower lol. The second time the guy literally just talked to Jack about the US for a minute then said welcome to Jordan and let us leave. I guess they like tourists!

Once we got to Wadi Rum, someone from the camp we are staying at met us at the visitor center and drove us into the desert to get to our camp! 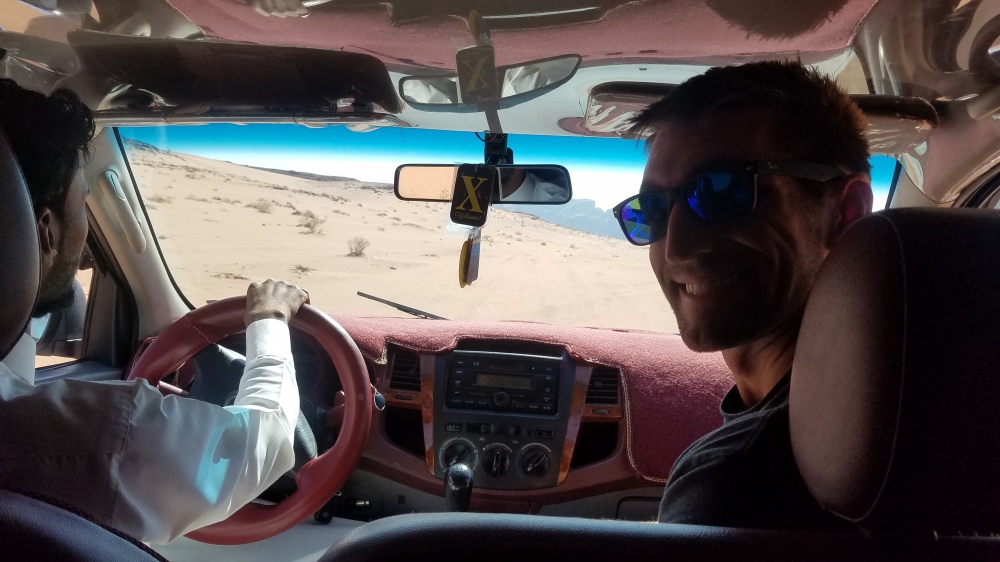 The camp is small, but theres a little area to hang out in outside your room that’s very pretty! 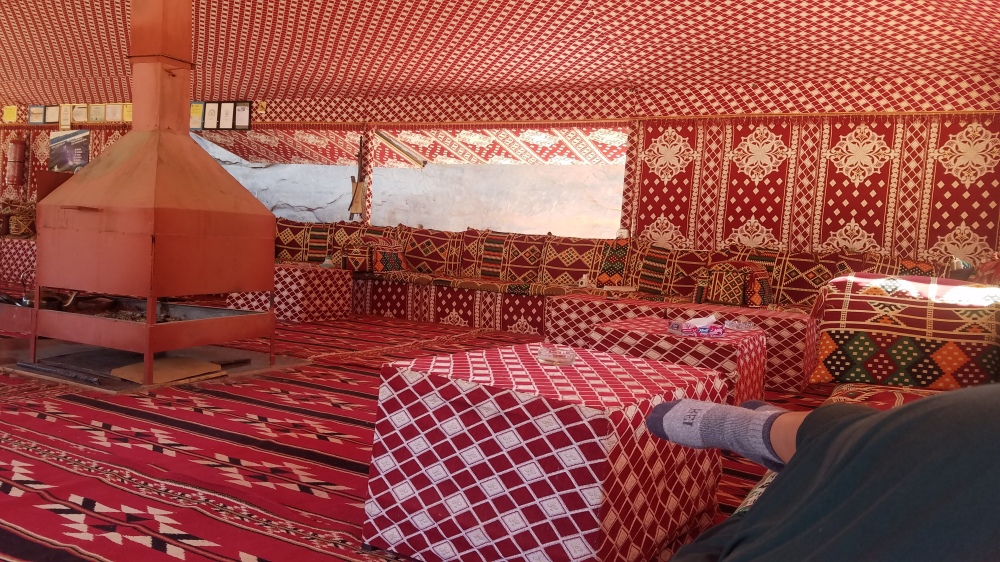 We decided to spend our first day doing a jeep ride throughout Wadi Rum, then do a sunset camel ride. We had a few hours before the jeep ride so we rested and had lunch. 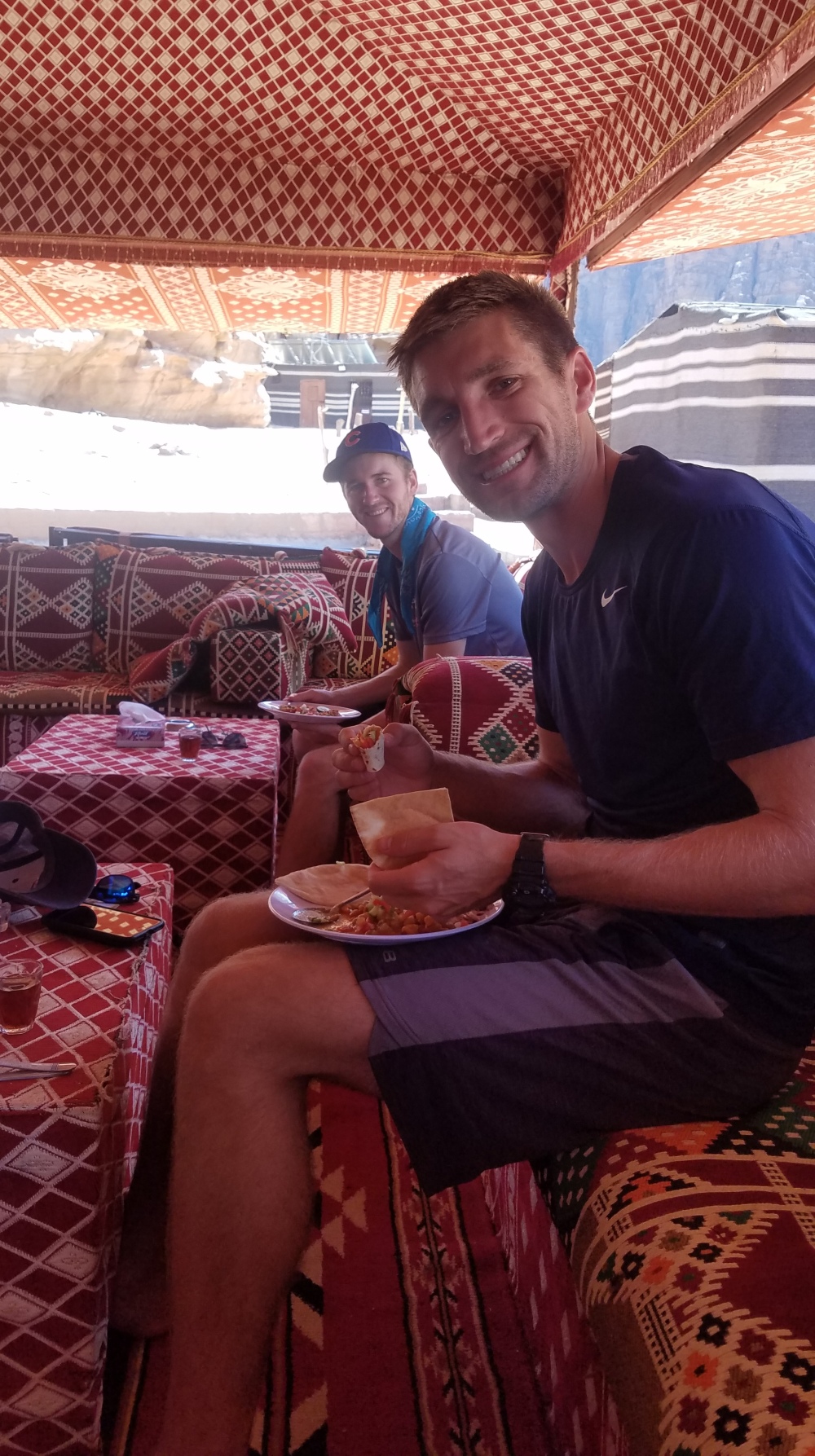 At 1pm we headed off on our jeep ride! (Basically a truck and they added seats to the back). It was definitely a bit of a bumpy ride at some points! 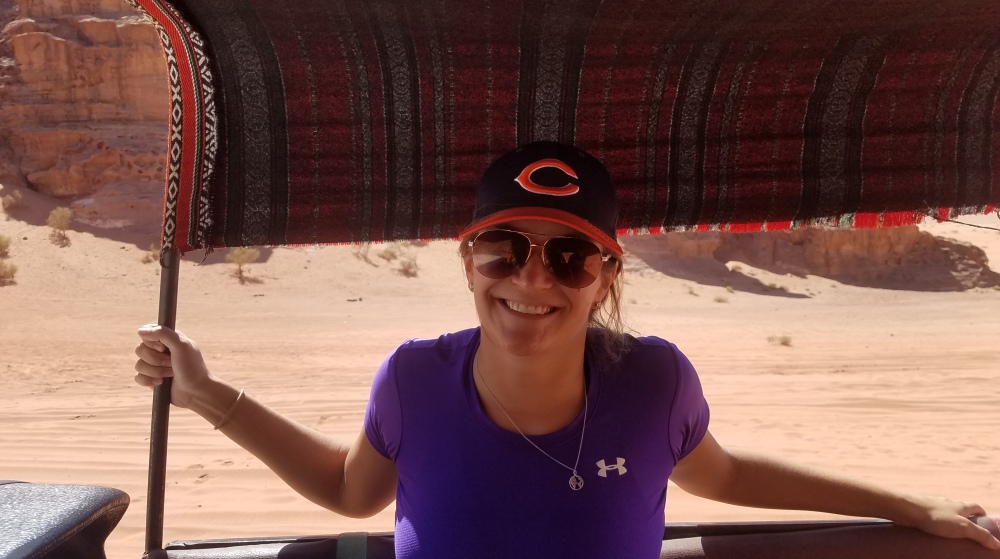 First stop was at a sand dune and we got to go sand boarding! Only problem was you had to walk up the sand dune… with the snow board… it was VERY tiring. 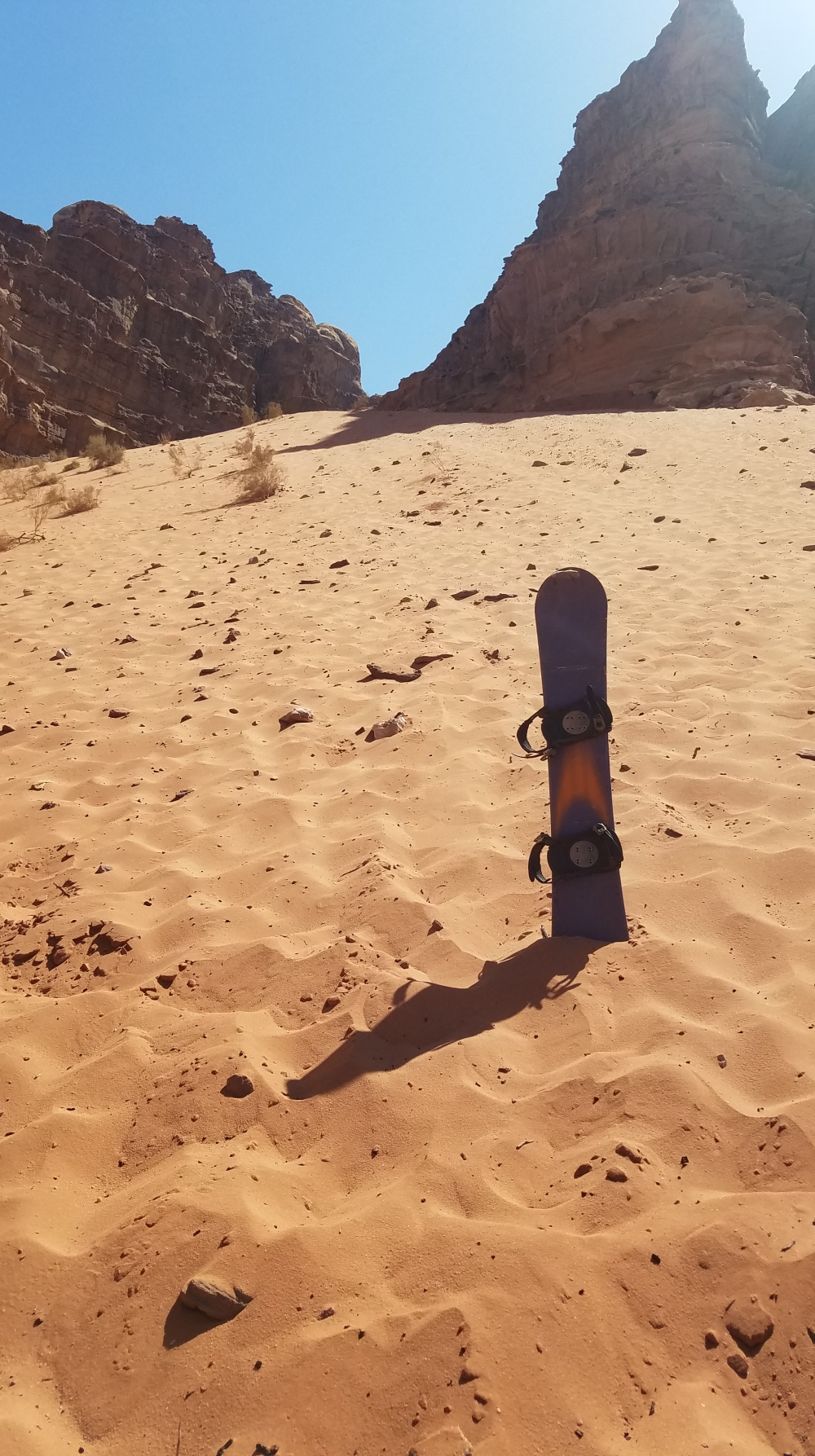 As someone who sucks at snowboarding I did a medicore job and fell alot but it was still fun! Jack and Sam both went twice, but I figured one walk up that dune was enough for me!

Sam being a little more skilled 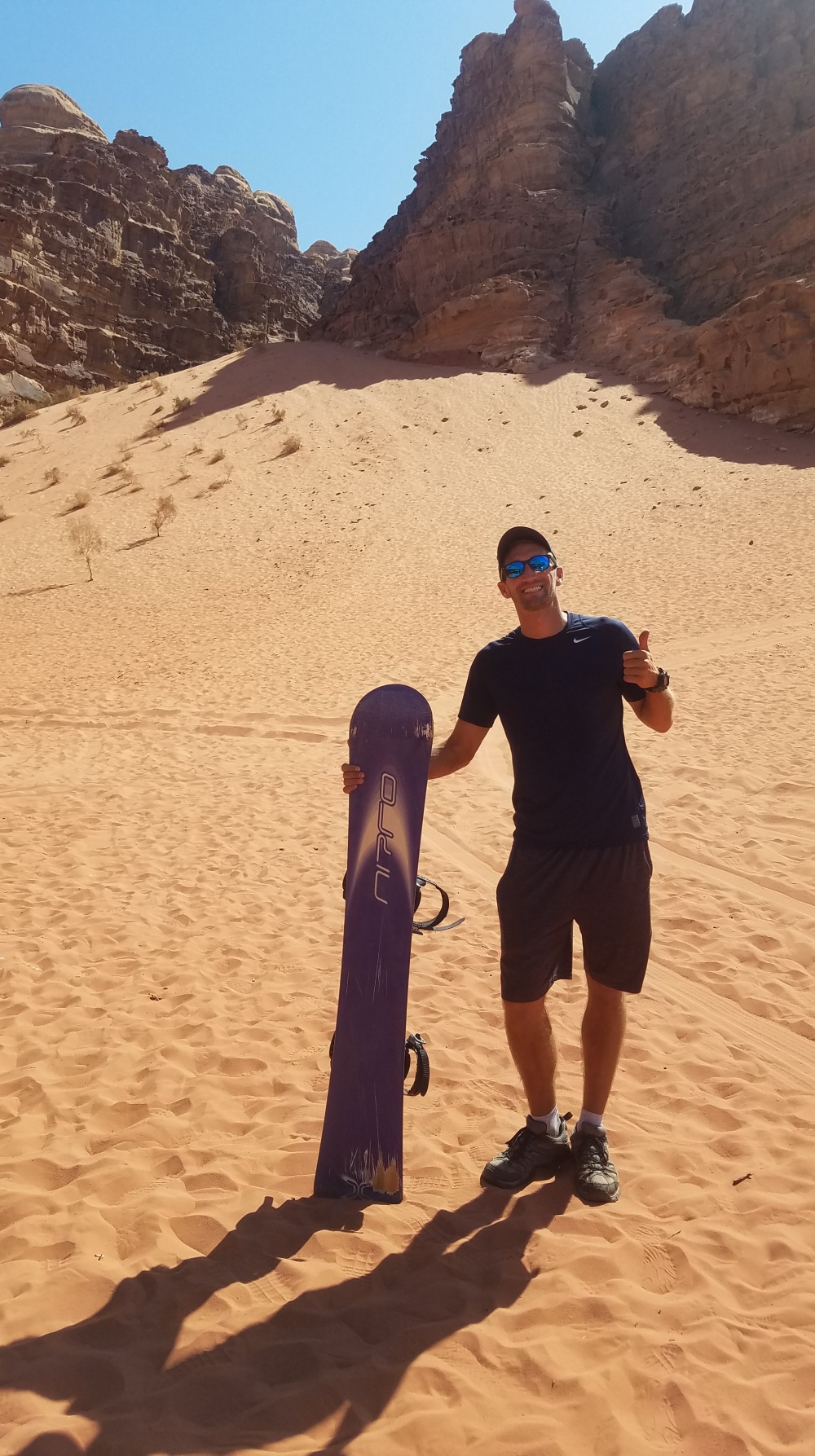 Our next stop was at some random carving on the side of a mountain. Supposedly was made to give directions to Petra. I definitely would still get lost though

Quick stop at Lawrence of Arbia’s house but he didn’t actually use as this house per our guide….. but had some rocks you could climb up for good views 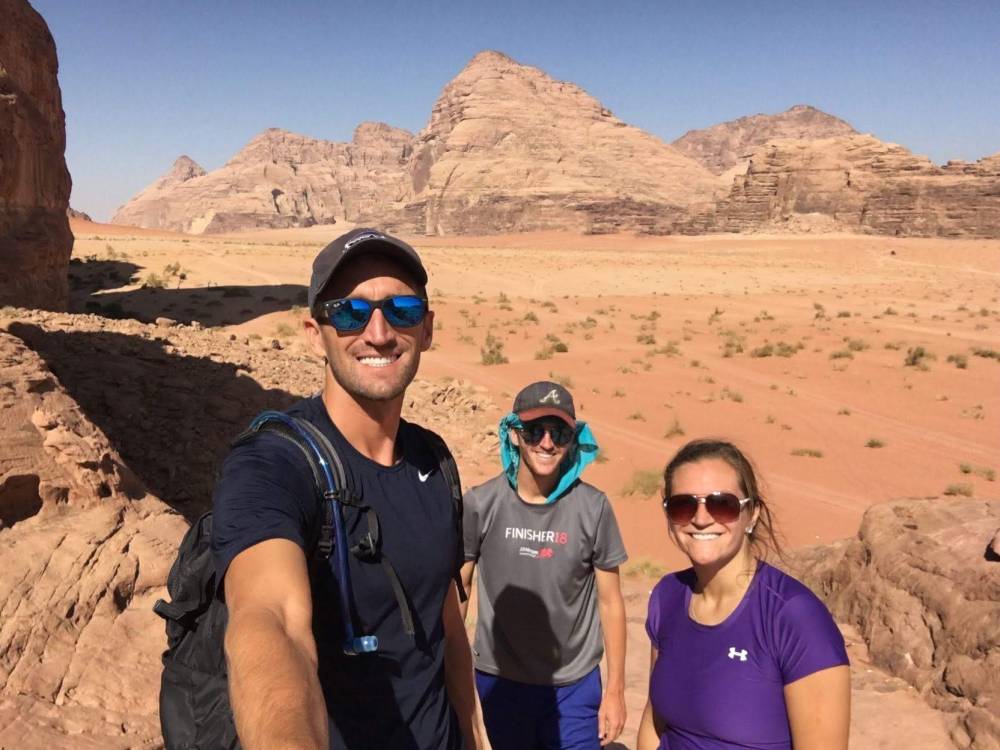 You could climb up and walk across which was a bit freaky, but obviously did it anyways 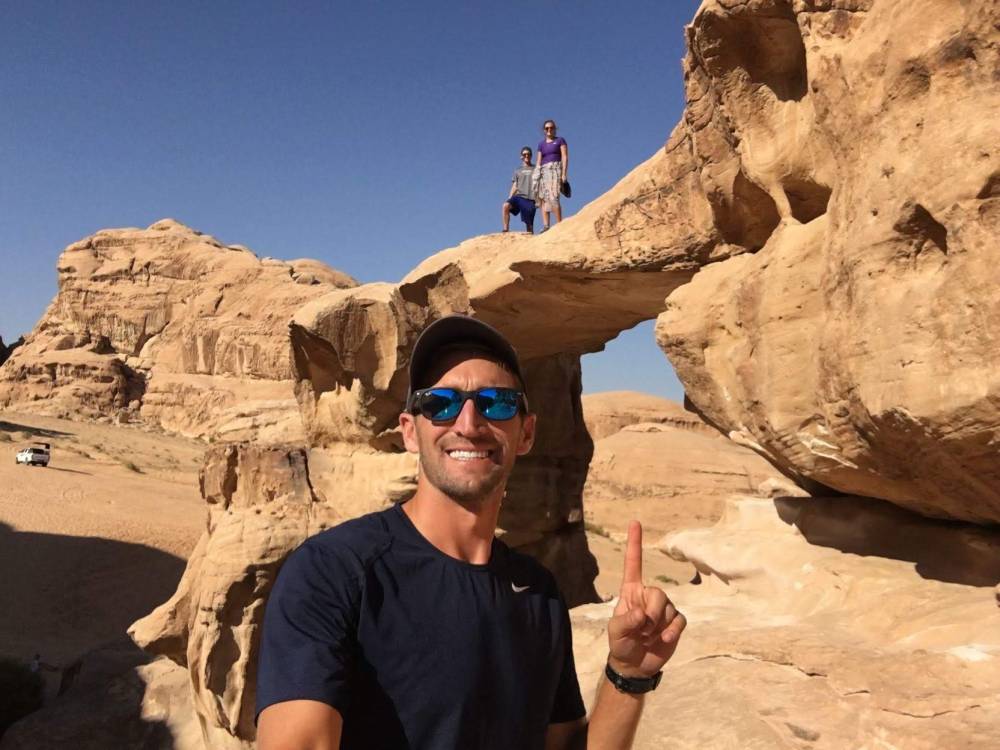 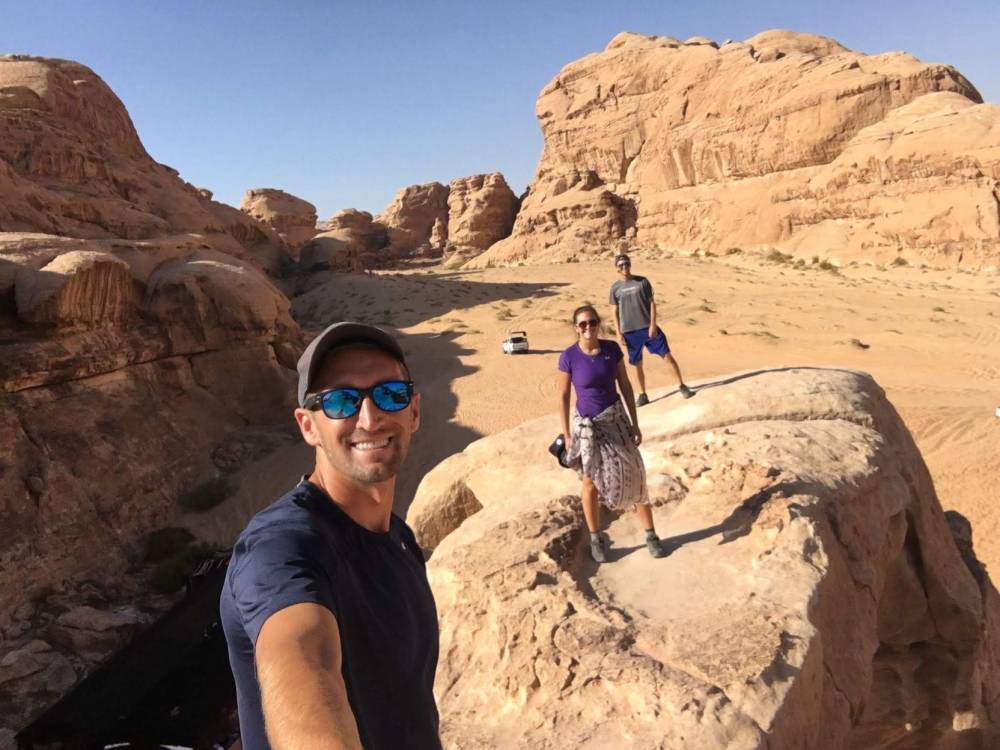 We also stopped at this “mushroom” rock. So like I guess that was cool?

The final part of the tour went through a canyon. The driver went a bit fast at times so here’s a cool pic of Jack not breathing in the dust lol

The last stop we made was at this place. They had a few carvings in rock as well.

When we got back it was time for the camel ride!!!! We all named our camels: Chad (Jack), George (Jamie), and Sparky (Sam). They were all connected to the back of the camel in front of them to make a line while walking, but George (my camel) basically had his head in Jack’s lap the whole time. He definitely wanted to be in the front! 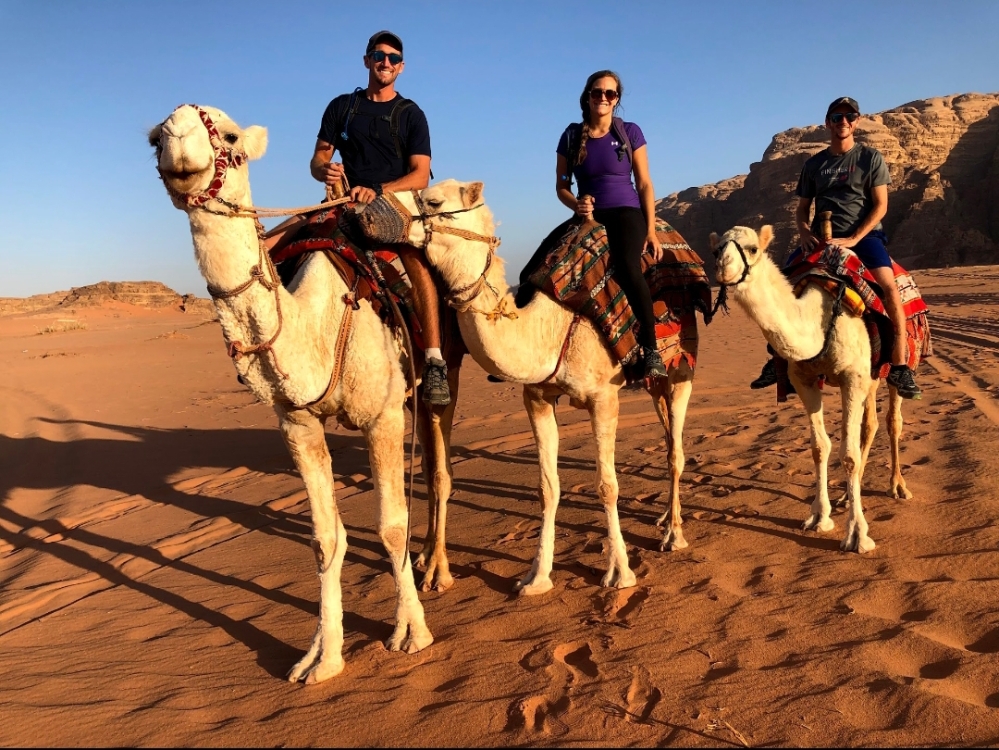 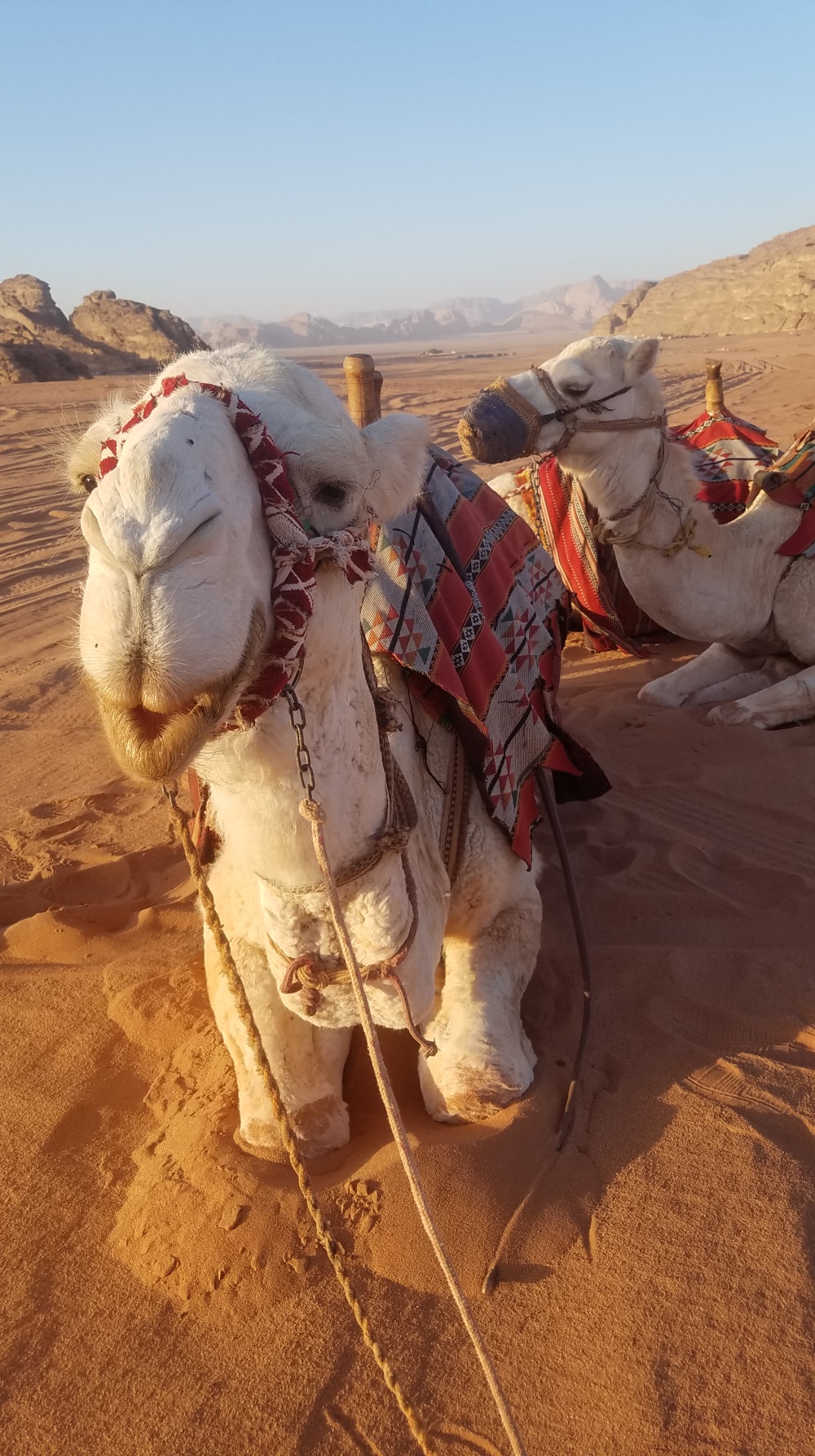 We rode on the camels for about 30minutes, watched the sunset, then rode back! 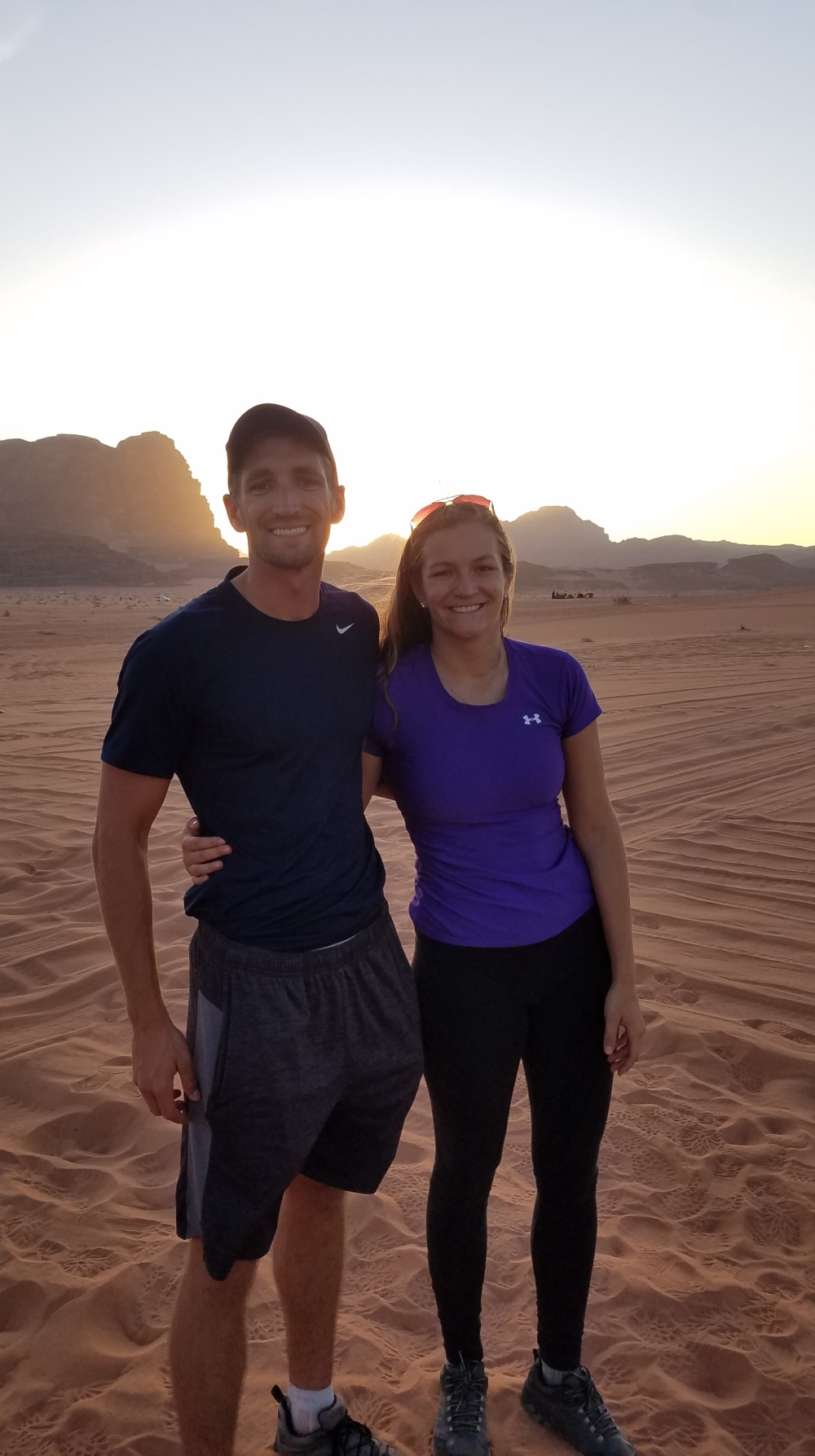 When we got back to our camp, we watched our guides pull our dinner out of the ground! They smoked some chicken. Yum yum yum 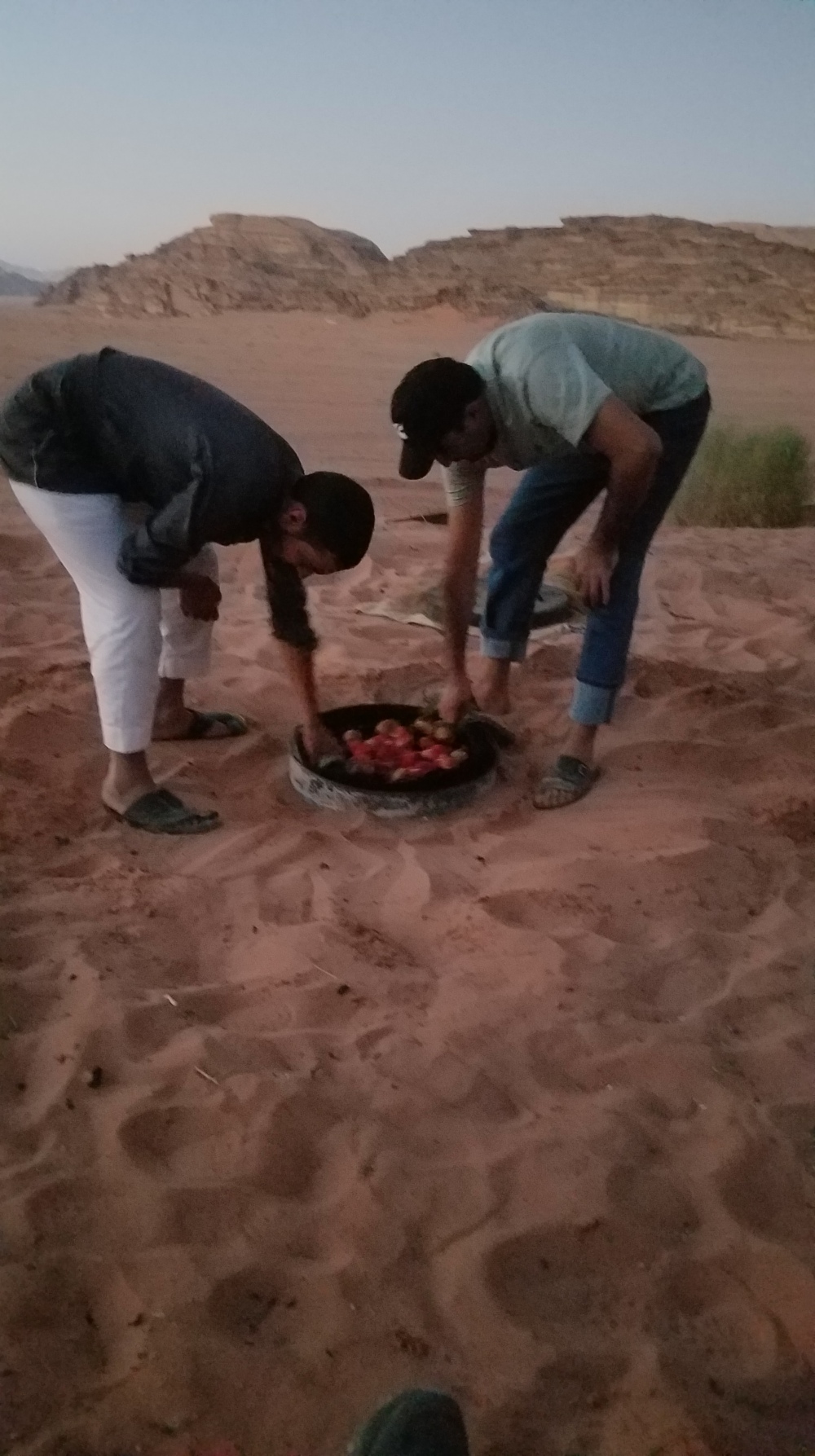 UGH. What a night. Our room was SO HOT, but there were also bugs EATING ME ALIVE so I had to put a blanket over me which just caused me to sweat a ridiculous amount. Basically didn’t fall asleep until 3am. And we woke up at 6am to hike. Yay!

Here’s our little room of horror

6am hike! We did a loop around a Siq which took about 3hrs and was just under 6 miles. It was good to start early so we didn’t die in the sun.

We also got to see a beautiful sunrise!

We proceeded into a siq while our guide tried to tell us stories about himself and his family (he didn’t have the best English). Eventually we figured out he is learning how to run a hot air balloon and one time his brother drove the car into a sand ditch and couldn’t get it out.  The siq itself was pretty and provided nice cover from the rising sun while we walked.
Once out of the siq, it took about another 40minutes across the barren desert to get back to our place. After a night of terrible sleep I was definitely over the hike at that point!

Once we made it back, we had breakfast at the camp (I mostly just ate pita and hummus). Then took off for Petra!