We got picked up for our Garden Route tour at 6:40am and proceeded to drive for 6hrs (with some breaks obviously) until lunch.

Lunch was at Mossle Bay, a little beach town (super windy though so it was pretty cold if you weren’t in the sun) 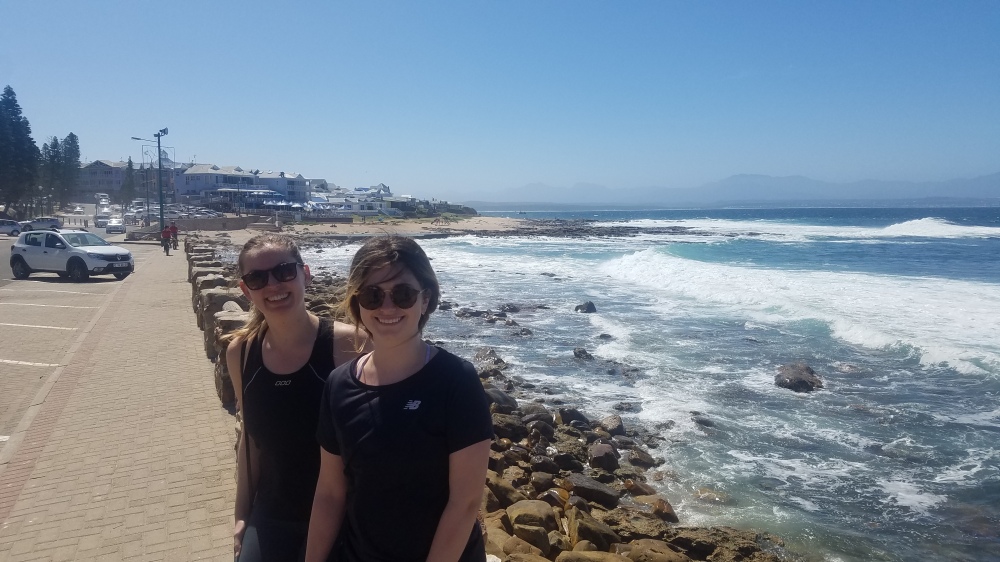 It took about another 30minutes to get to our next location to do a quick kayak! We got to kayak to a little waterfall (only took like 10min) then went along the river for a little bit enjoying the sun. In the first 20 seconds of the kayak you had to go under this TINY bridge. Like you had to be fully laying down in order to not hit your face. Not sure why the kayak company doesn’t just set up their stand 100 feet on the opposite side of this stupid bridge BUT WHAT DO I KNOW. 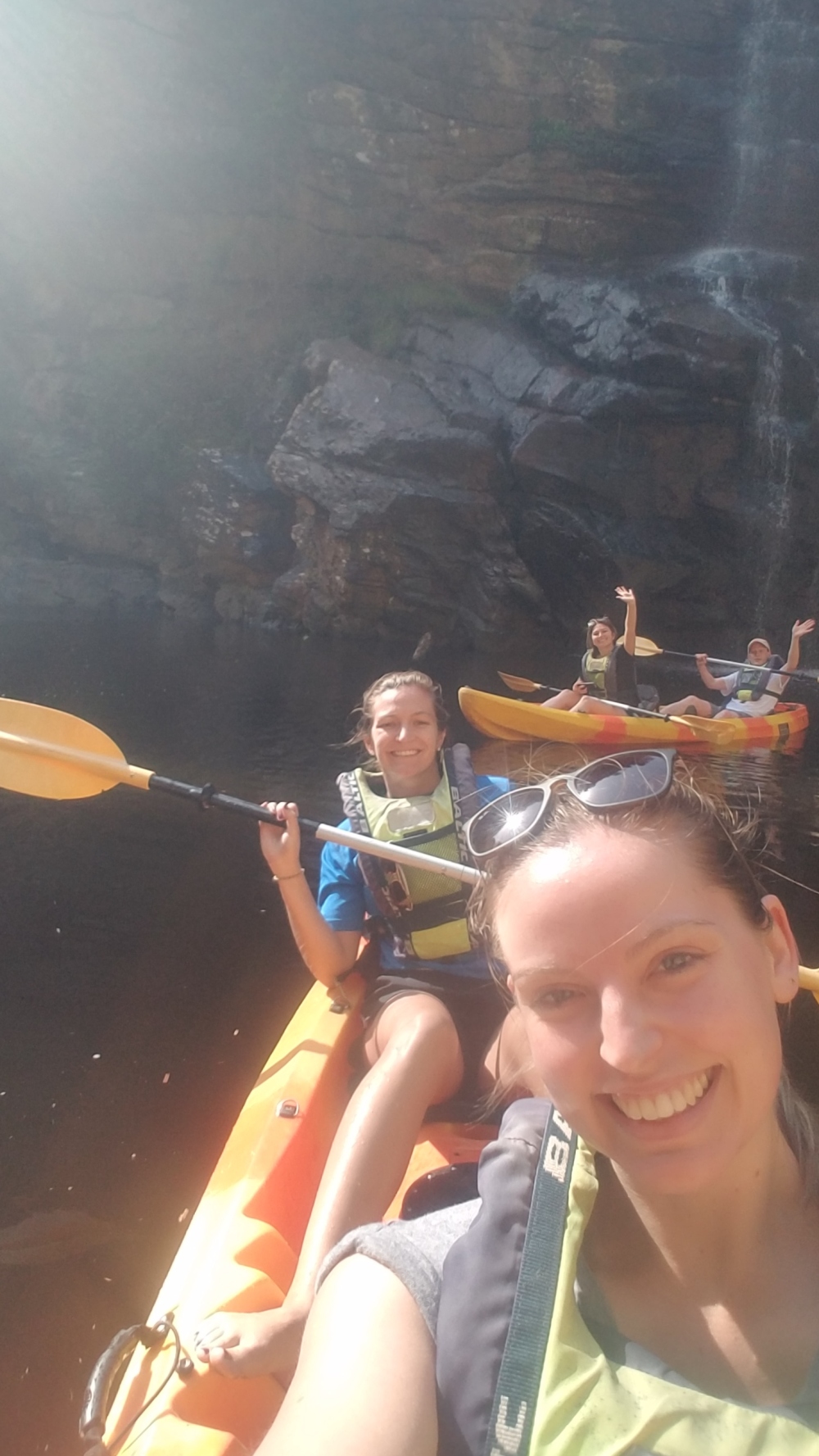 We had another 30minute drive to get to our hostel for the night. The hostel is right across from a nice beach so we spent some time there before a delicious chicken stew dinner!

View from our hostel balcony!

We left our hostel at 8am to head to the world’s highest bridge bungee jump- holds the Guiness World Record! It is 216 meters (like 710 feet). I’ve gone bungee jumping once before in New Zealand, but it was about half the size and I figured if I were to ever do another why not the tallest?

One other girl in our van also decided to jump so thankfully I had someone to talk to while waiting on the bridge! I went 5th in our group… so plenty of time to get nervous! Thankfully, once it was my turn, they were very quick to get you ready and only had you stand at the edge for about 5 seconds before telling you to jump! I ended up enjoying this bungee a lot more than the New Zealand one because the fall was longer so you actually had a chance to look around after the initial fear of having jumped. My friends watched from a TV so got some high quality photos.

The only part I didn’t enjoy was hanging upside down while waiting for a guy to repel down to bring me back up. Something about hanging upside down completely alone from a super tall bridge where all you can hear is the wind makes you start to worry about the safety of hanging from your ankles BUT eventually the guy was there and brought me back up!

From the bungee jump, we drove about 30minutes to our lunch spot. Before eating we did a mini hike along the coast to some suspension bridges and a little rock beach. It was nice to get some exercise after sitting in a van for so many hours the last two days! 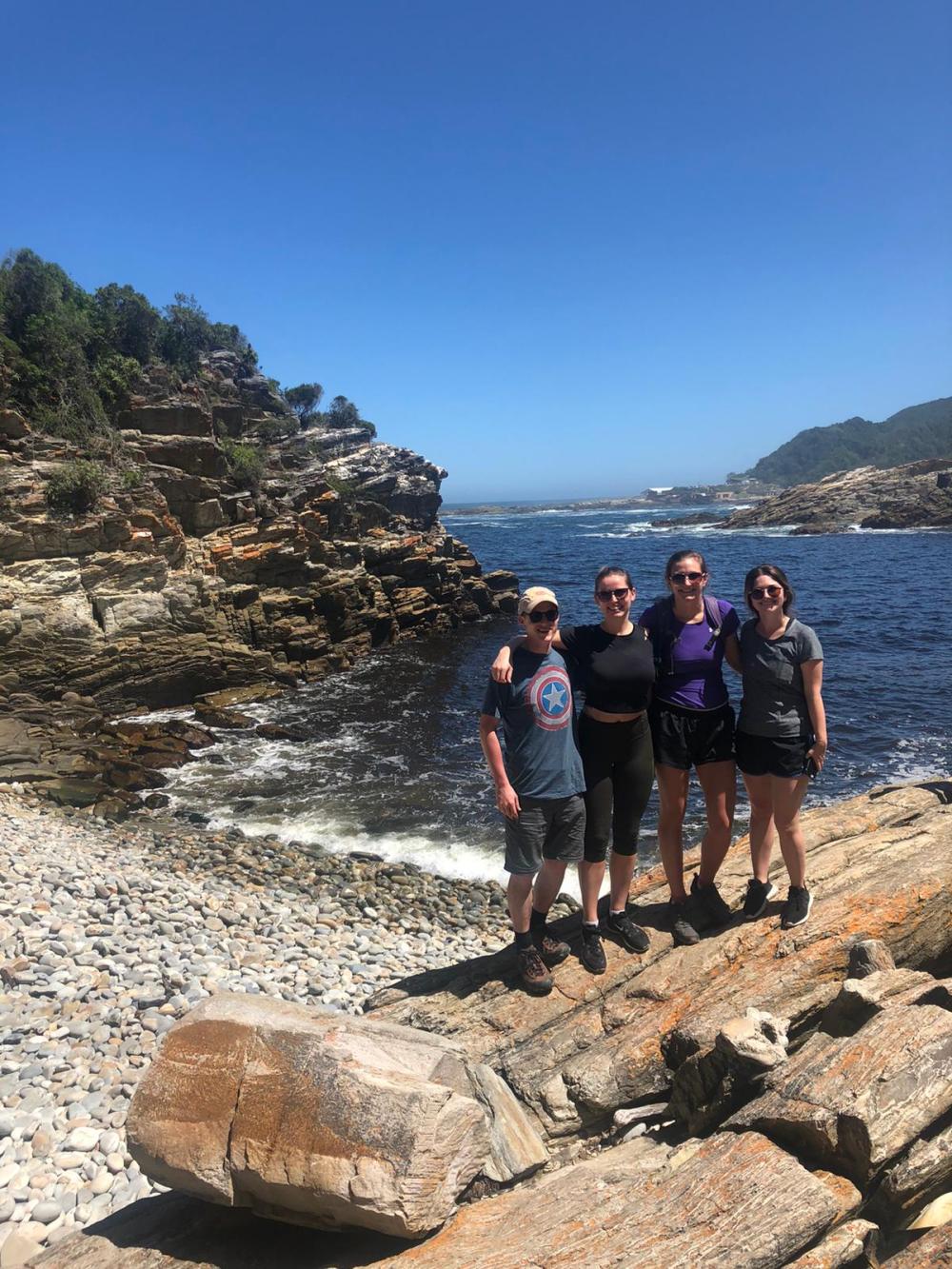 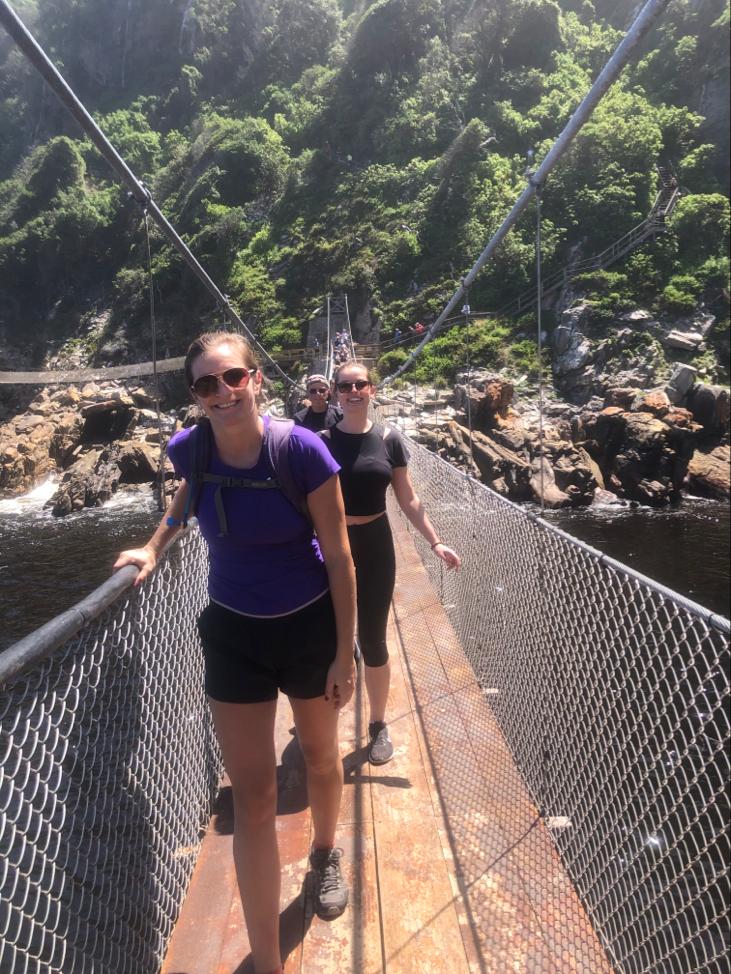 After lunch, we headed towards a zipline place. Four of us decided not to zipline (optional activity so you had to pay to do it and the bungee actually included a zipline so I figured I was good for the day). We took a walk and saw some of our van do a few zip lines and saw some waterfalls. It was almost 100 degrees outside at this point so eventually we got too hot and needed to go sit in the shade with some ice cream 🤣

Our destination for the night was Jeffrey’s Bay, which was about another hour drive from ziplining. Our hostel was again right next to the beach, however, the overall hostel wasn’t quiet as nice as the last one! The handle inside our bathroom broke so if you closed the door all the way you would get stuck inside 😂

We went for a walk along the beach for about 30minutes, showered, then had dinner at the hostel- make your own burritos! Since we had a 5am wake up call the next day, we went to bed shortly after dinner.

Woke up bright and early to head to Addo Elephant National Park. It took about 1.5hrs to drive there (this van is my new enemy).

Right before we arrived, we got to see some giraffes roaming around in one of the private game reserves! There was even a little baby one 😍 There are no giraffes in Addo so our guide pulled over for a few photos.

Once we got to Addo, we started our true safari adventure! The first creature we saw….. a dung beetle! Got to see lots of these little guys. They lay eggs in elephant dung (YUM!) 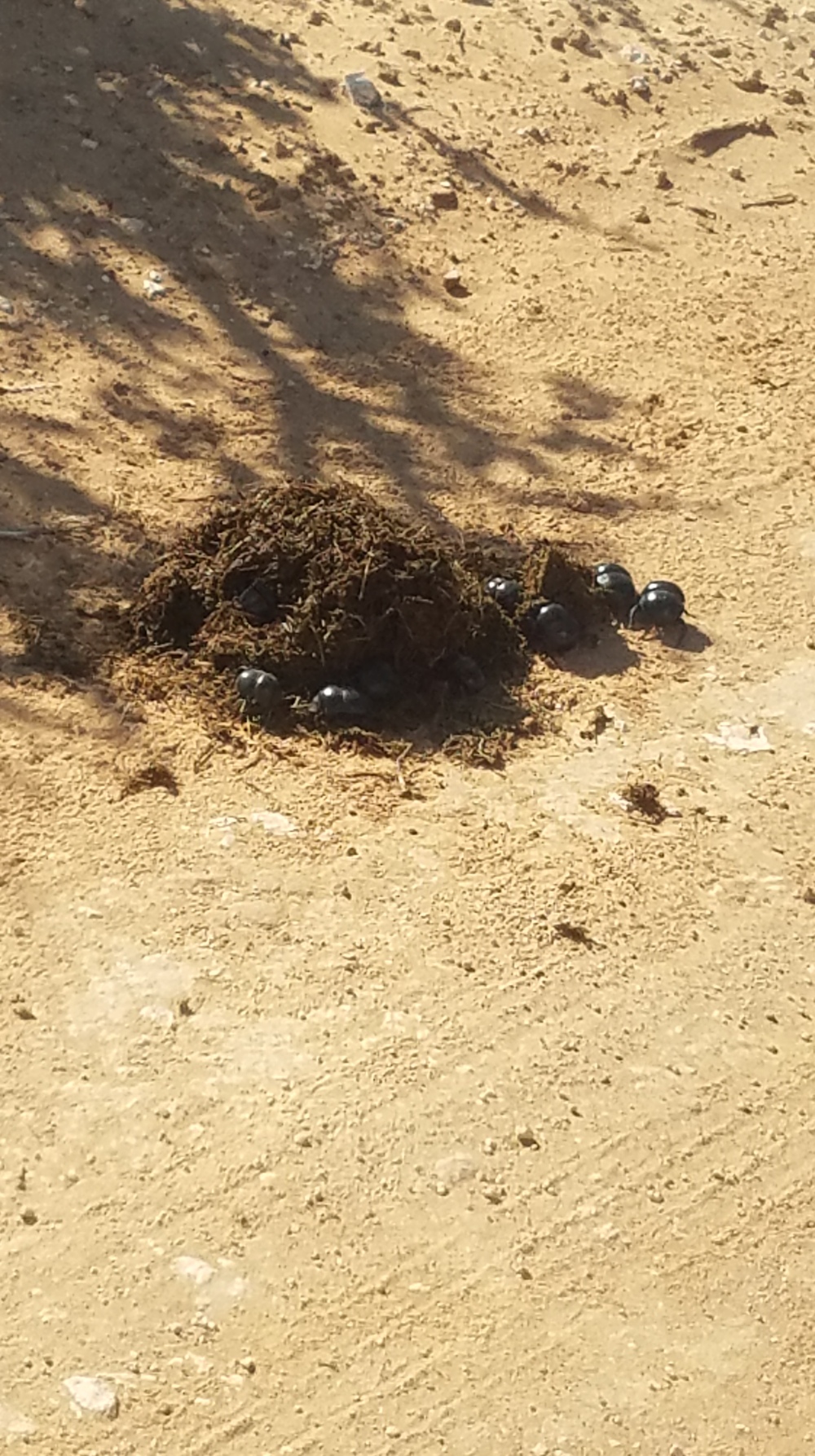 Next along the route we saw a bunch of Kudu! Actually really cool animals- the men have spiral antlers! Also, this was the animal in the array of meats we had on Alyssa’s birthday that I did not like LOL.

Driving along we ran into some zebras in the road! V cute animals giving each other hugs 😍

Our guide was on the outlook for elephants and thankfully he found some at a watering hole! We actually got to get out of the van and go into this enclosure thing for humans to spy on the animals 😂 we got some amazing views of this elephant going to the watering hole and drinking! Sooooo cute

Back into the van, we spotted some Warthogs on the side of the road having a family outing- seriously 2 parents with like 5 kids just chilling and eating grass! Our guide put Hakuna Matata on the stereo, which really just completed the experience.

Along the rest of our drive we spotted a lot more of the same types of animals. We saw some really baby elephants from a farther distance, but still SUPER cute. It was fun to watch the animals just living their lives, hanging out, chilling with other animals.

There was a buffalo chilling in a watering hole with some zebras! 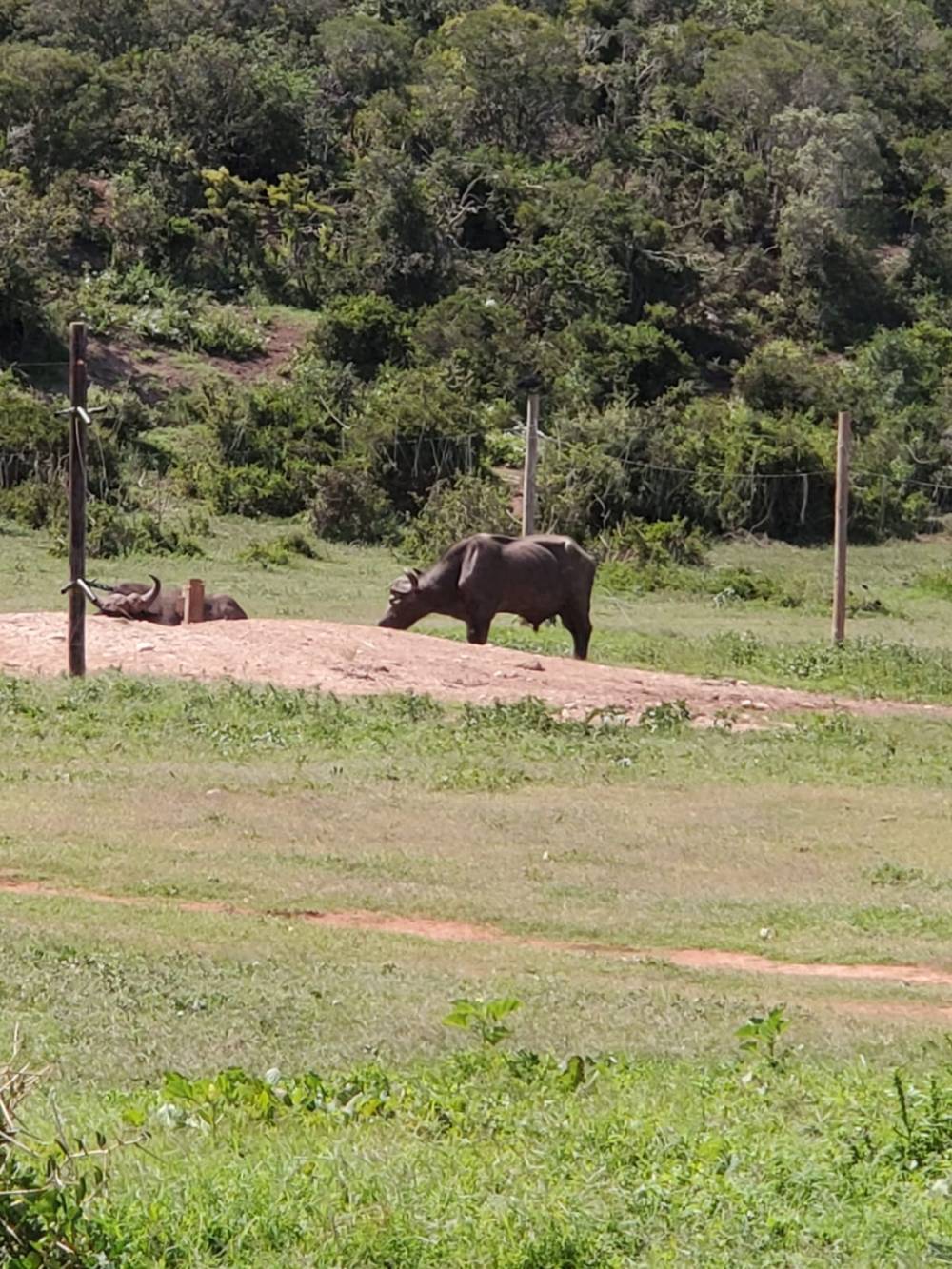 An ostrich just eating some food on the side of the road (apparently they eat literally everything and the pebbles they eat actually help their digestion.

We drove around for about 3hrs and on the way out, a mini herd of zebras basically surrounded our car! There were two little ones rubbing their faces on the grill, trying to scratch themselves. Our guide ended up having to reverse and go around because they wouldn’t move!

It took about 1.5hrs to get back to Jeffrey’s Bay. We did some shopping once back and then went to the beach to relax in the sun for a few hours before dinner.

Dinner was at a local restaurant called Nina’s. It basically just had every variety of food you could want- I got some ribs. All of it was very good although we waited for our food for quite a long time!

We all ended up going to bed shortly after getting home from dinner as we were exhausted from the early morning and long day!

Alyssa and I joined Jess for some morning yoga before breakfast and heading on the 3hr drive to our next stop.

We left the hostel behind at 8:30 and drove to a shopping center (close to the final destination) for some lunch. I ended up getting a quarter of a watermelon cause it looked delicioussssssss. A bit messy lol 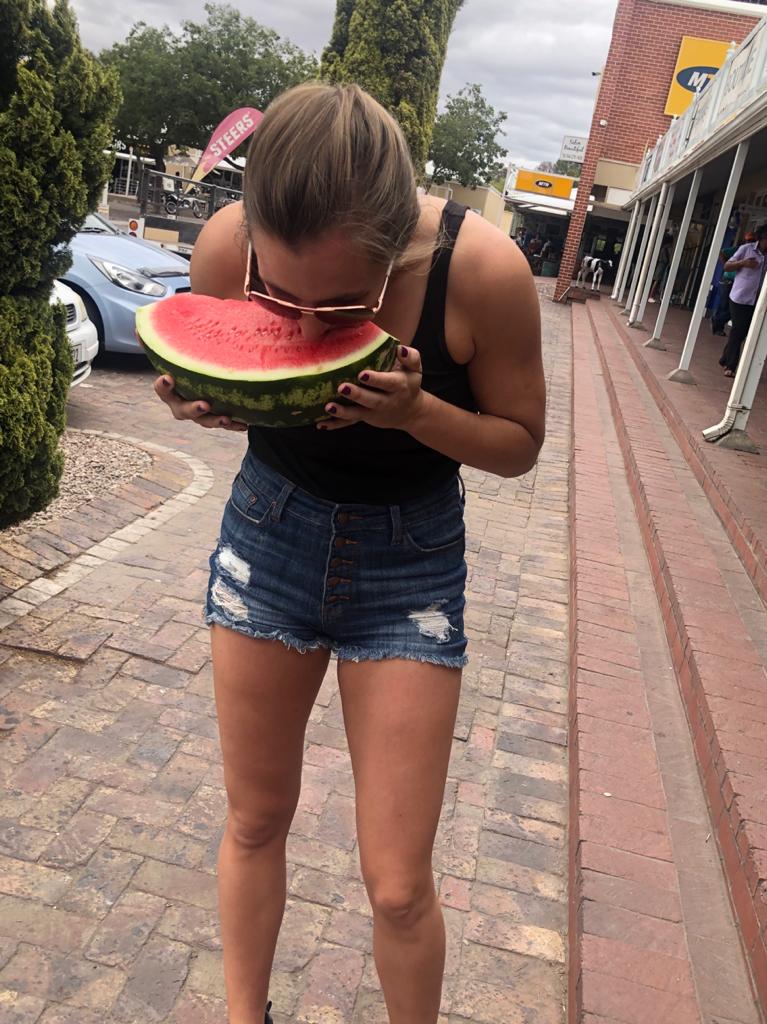 From lunch, we went to the Ostrich farm! We got a quick lesson on ostriches and then got to interact with some! Fun fact about ostriches- the females are grey and the males and black, but when they’re young they are all grey, however, their gentials are inside them (?) so farmers only know the gender once they’re fully grown and their feathers change colors!

First on the interactive tour, we got to feed an ostrich. They are pretty aggressive in their eating so it was a bit frightening to stick your hand out with the food for the ostrich to peck at.

Next, we got to hug the ostrich. This was a bit more fun cause there was no risk of injury 😂 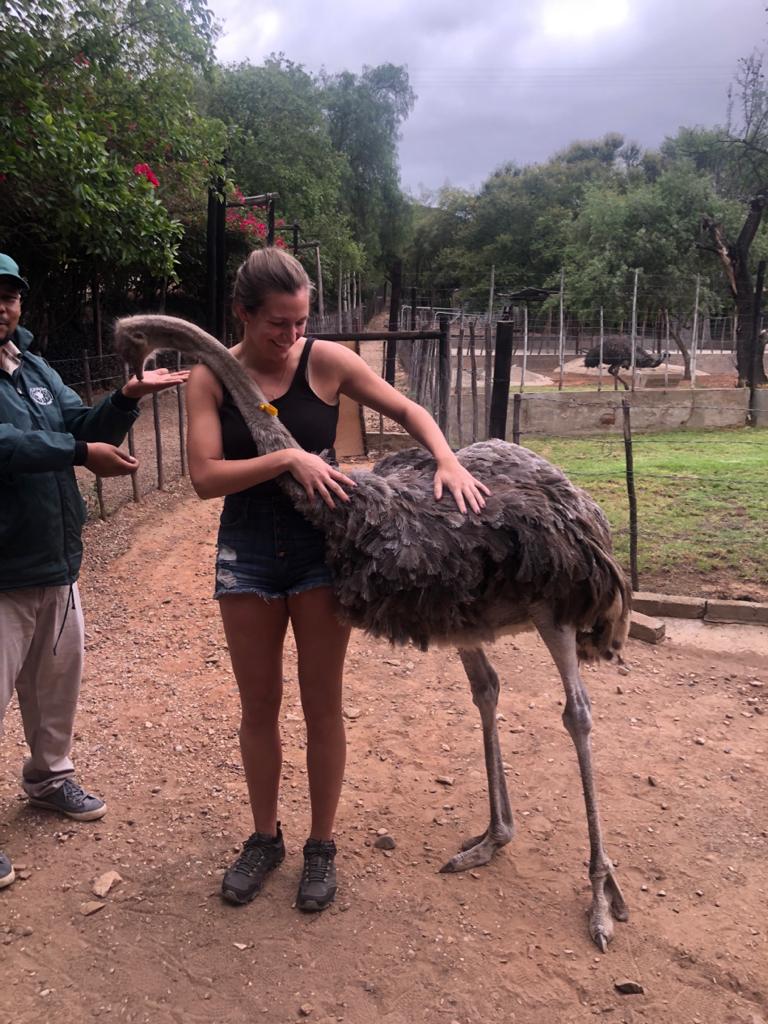 Finally, we had the opportunity to get a neck massage from the ostriches….. which involved holding a bucket of feed with your back to the fence while the ostriches reach around your neck to eat…. pictures explain it better.

From the ostrich farm, we headed the Conga caves. Basically just a giant cave with lots of caverns and we walked through them with a guide who kept singing really nicely to us lol

After the caves, we went back to our hostel for the night. We mostly just chilled and ate dinner, but I also made a fun new friend! 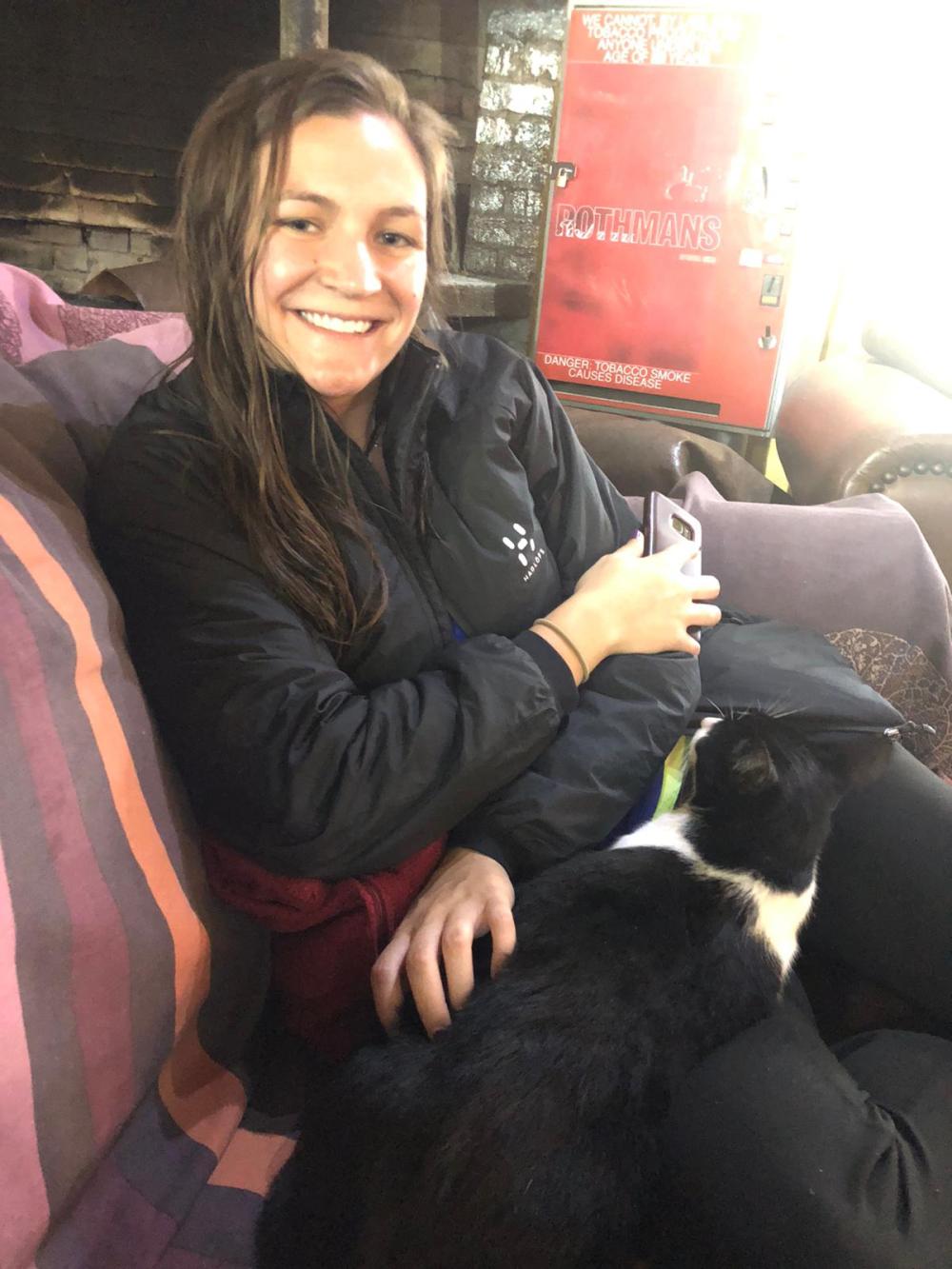 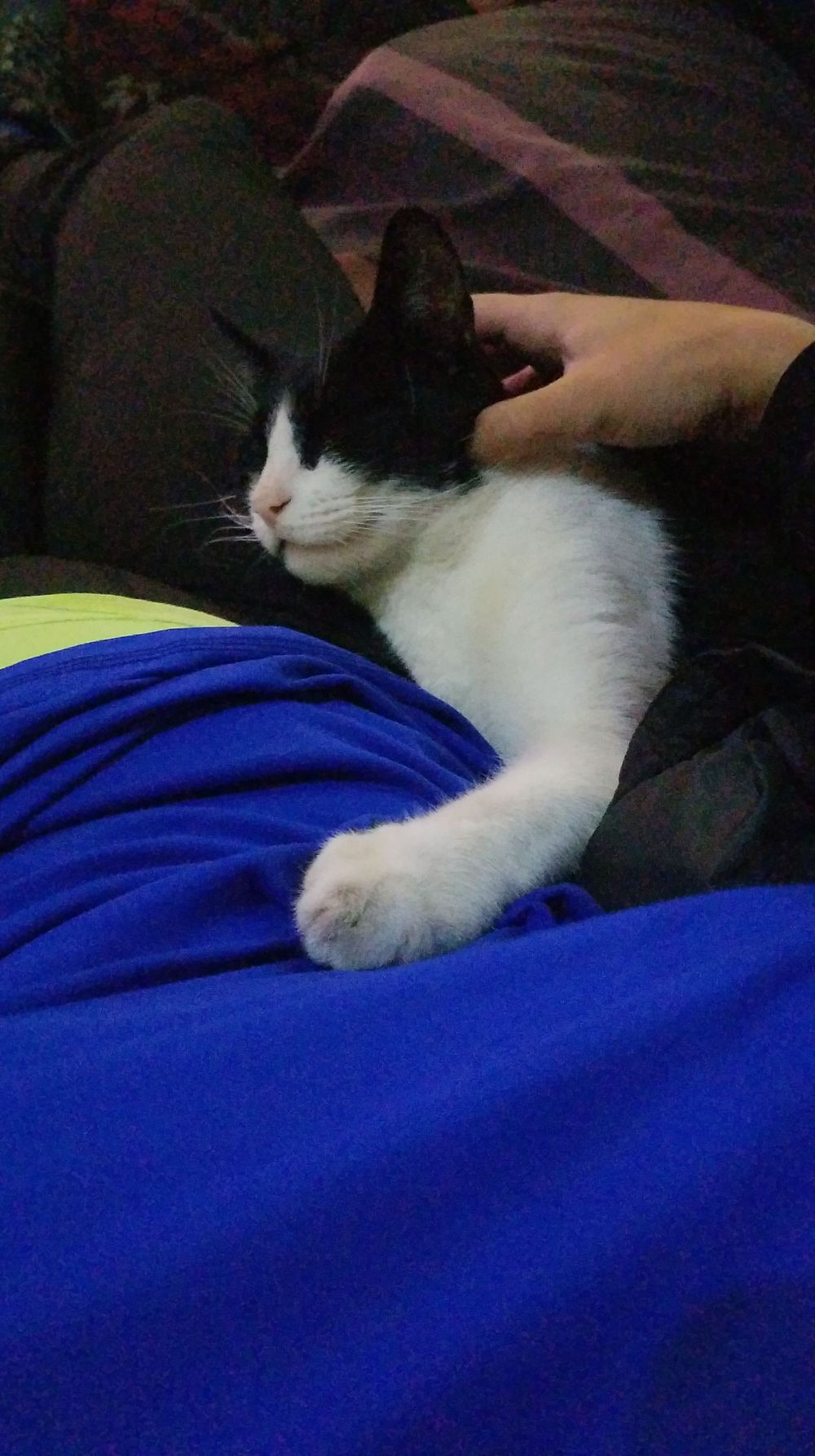 After dinner our guide got us traditional shots (springbok), which are cream liquor and mint. Pretty good!

He also got us marshmallows and chocolate biscuits to make s’mores! I haven’t had a s’more since moving to London so it was fun to eat a couple.

On our last day of our tour we had a elephant walk and a game drive on a private reserve! 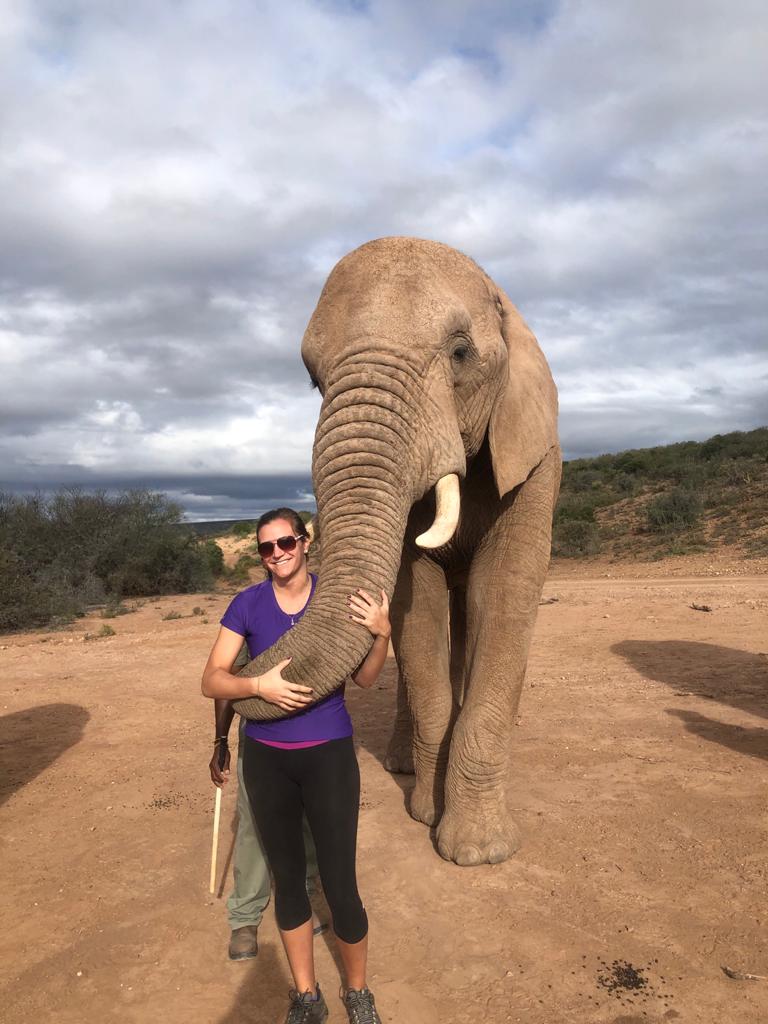 After the elephants we hopped on a 4×4 and headed into the private game reserve. Our guide was super informative and gave us a lot of information about the animals we saw!

I’ve learned that it would actually take like 8 lions to take down a giraffe. Also, giraffes can kill a lion, human, etc. in one kick! Now I know to never get too close to a giraffe!

We also got to see two rhinos!! Apparently, they don’t even advertise they have rhinos because that’s how bad the poaching problem is. Our guide even asked us not to put the location of the reserve if we posted photos. I guess one kilogram of rhino horn is worth 600,000 USD. The Asian market apparently thinks it is like a viagra even though it’s been scientifically known not to be. Our guide said poachers will helicopter into reserves at night to get the horns. And most rhinos don’t survive. It’s very sad and rhinos are likely to be extinct within the next 15 years ☹ 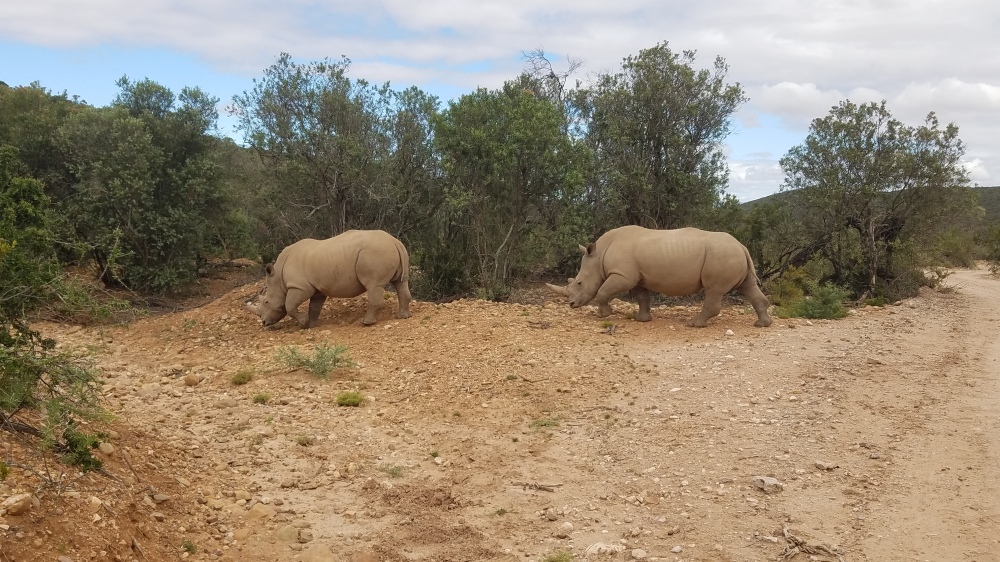 After we finished up our game drive, we had to hop back in the car for the long drive back to Capetown! We had a lunch stop on the way that included a little wine tasting as well! Overall, it was a cool tour and we got to see a lot of cool animal and beautiful scenary!